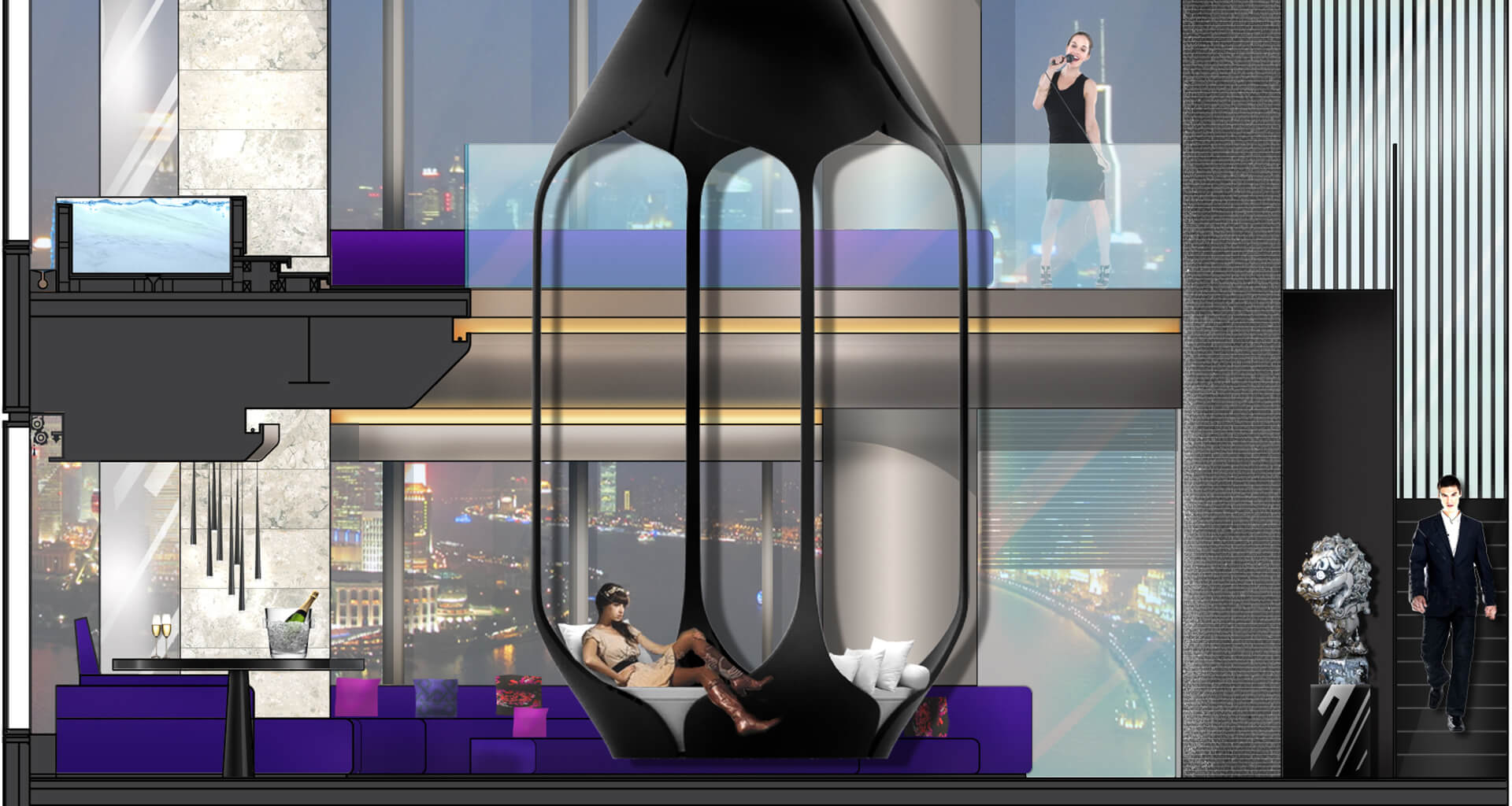 Suspended from the ceiling of the Cloud on the Bund Suite at the W Hotel, Shanghai, is a giant hanging birdcage bed, which guests are encouraged to spend as much of their day as their night in. The double-height bed, which affords its occupants spectacular views across the city from the comfort of the oversized bespoke circular mattress, was inspired by the tradition that the locals had of taking their birds out for the day.

Owning a pet bird was commonplace in many of China’s cities, and it became just as ordinary for the owners to carry their birds, in their cages, to local parks where they would hang them upon the branches of trees. The birds would sit, singing, whilst their owners would spend the day socialising and playing Mahjong.

When it came to designing the bed, the volume and the architecture of the hotel led the concept, as there was a need to fill the double-height space in the room. G.A wanted to create a four-poster bed that felt in keeping with the W brand; something with a strong visual impact and an element of fun but also with a story that led back to Shanghai.

There were several stages in taking the bed from concept to realisation. Initially hand sketches were prepared to give a general look, feel and scale to the idea. These were then drawn up on CAD before they were 3D modelled and transformed into coloured renderings. Once the team were happy with the design and shape, the model was 3D printed, sanded and sprayed in a high gloss finish. 3D printing offers a great tool for visual communication and this final stage allowed the concept to be presented to the client in a very relatable form.

The room was always intended to be a top-level suite with the likelihood that it would be marketed as a party-suite and function space, suitable for afterparties and fashion events. The original intent was for the bed to rotate and swing like a hammock. To achieve this G.A looked at two possible options. Option one was to tether the bed with bungee style ropes to allow the bed to swing whilst preventing it from rising too high. The second option was to have the bed resting on a ball bearing base which would take the load yet allow movement.

The final bed didn’t stray too far from the original concept – it was fixed at the top and sat, cradled at the base. This allowed some movement to be retained although this was restricted to rotation, with the idea that the bed could be turned so that guests could face the giant wall of TV’s (comprising 16 LCD screens perfect for bespoke programming, branding or entertaining) or gaze out into the city through the floor to ceiling windows.

16th March 2022 | Behind the scenes, Uncategorised

Behind the scenes: Waldorf Astoria Amsterdam